£50 Bonus when you take out a new contract 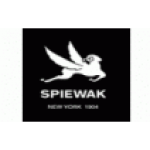 Save money whilst shopping with Spiewak cashback! Simply click get cashback, shop as normal and earn rewards in your Quidco account.

A journey from Warsaw to Brooklyn, New York shaped the destiny of Polish immigrant and entrepreneur Isaac Spiewak. In 1904, his handcrafted sheepskin vests sold to Williamsburg waterfront dockworkers became a foundation for the family business, starting with a small manufacturing space. Spiewak soon began creating the iconic U.S. military uniforms that would serve everyday heroes throughout the twentieth century and beyond.

Since World War I, the family name has traveled over land, sea and air with a promise to protect. Spiewak's Golden Fleece was a dependable sight on outerwear and gear, including the pea coat, snorkel parka and flight jacket, produced for decades of use by the Armed Forces. As a style statement seen on college campuses and city streets today, the Spiewak legacy is a daily uniform for life.