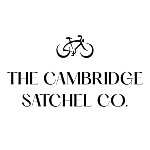 Save money whilst shopping with The Cambridge Satchel Company cashback and deals! Simply click get cashback, shop as normal and earn rewards in your Quidco account.

Save 30% on previous styles and colours in the Outlet

The Cambridge Satchel Company is best known for its colourful range of leather satchels and bags which are all made in its UK workshop. With celebrity fans including Alexa Chung and Taylor Swift and collaborations with prestigious designers such as Vivienne Westwood, the brand is a global Made-in-Britian success story.

The traditional bags are created with a modern twist and include best-selling new styles such as the Backpack, the Tote Bag, the Traveller Bag and most recently, the Binocular Bag. This year also saw the introduction of the company’s first ever dedicated Men’s Collection.

The company was founded in 2008 by Julie Deane OBE and her mother Freda Thomas from their kitchen table with just £600. The brand now sells to over 120 countries through it’s global website and four UK stores.