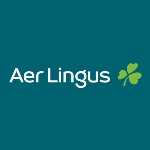 Save money whilst shopping with Aer Lingus cashback and deals! Simply click get cashback, shop as normal and earn rewards in your Quidco account.

Aer Lingus is the national airline of Ireland, founded in 1936.

for all other long haul flights

Aer Lingus is the national airline of Ireland, founded in 1936. In summer 2022, Aer Lingus operated over 100 routes, flying to over 71 direct routes and to 62 destinations between Ireland and the UK and Europe. The airline operates 16 transatlantic routes from Dublin, Shannon and Manchester UK to North America and the Caribbean. Aer Lingus is a 4-star airline, awarded by Skytrax, the international air transport rating organisation. Aer Lingus is a member of International Airlines Group (IAG), one of the World’s largest airlines groups. As part of IAG, Aer Lingus has pledged to achieve net zero carbon emissions by 2050 and has committed to powering 10% of its flights using sustainable aviation fuel (SAF) by 2030.