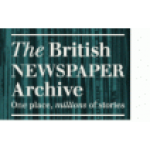 Save money whilst shopping with British Newspaper Archive cashback! Simply click get cashback, shop as normal and earn rewards in your Quidco account.

for a genuine 1 month subscription

for a genuine 3 month subscription

for a genuine 12 month subscription

for a genuine pay as you go package

Thanks to its partnership with the British Library, the British Newspaper Archive is one of the world's leading newspaper archive resources. The extensive collection is now accessible to the public, offering more than five million pages of historical British Library newspapers, making them a perfect resource for reporters, editors, students, and historians.

The British Library currently has the finest collection of newspapers in the world, with more than 34,000 titles from the United Kingdom and overseas.

The collection also includes the ongoing legal deposit—since 1869 it has required publishers of British and Irish newspapers to send a copy of each published issue to the library. The legal deposit collection includes complete runs of the leading London editions for all British daily and Sunday national newspaper archive features.

The library selectively acquires other newspapers from overseas, as well. These copies are not only written in English but other European languages for a more complete archive. The collection also includes newspapers from Commonwealth countries, whose newspapers the library previously received through colonial copyright.

The British Library holds its newspapers in different formats, with more than 660,000 volumes in print, 630,000 reels in microfilm, and over 20 million digitised pages.

You can also view newspapers online through the British Newspaper Archive. Searching through the archive is free, but you will need a personal subscription to view the content.

Viewing the British Newspaper Archive is free within the British Library’s reading rooms, however. The British Library also has a subscription to various electronic resources, including most major UK national newspapers, and a few international selections.

The archives enable anyone to search through hundreds of millions of articles using dates, titles, locations, names, and keywords. The results appear instantly, and there’s no need to spend endless hours manually searching through hard copies or microfilms at the British Library in Yorkshire or London.

It contains most newspapers published in the United Kingdom since the 19th century, with the archive currently adding collections from the 20th century, as well. Towns and cities publish several newspapers for different audiences based on political affiliations, geographical location, and social status, so the anthology is colossal.

The British Newspaper Archives offers a one-month subscription and an annual subscription. Both give unlimited access to viewing every page currently in the archive.

On completion of the subscription, we'll process your cashback before sending the money into Quidco account.

Search for any content that interests you from news articles about local, regional, or national events, to obituaries, family notices, letters, advertisements, shipping notices, classifieds, and illustrations. Remember to secure your Quidco cashback on British Newspaper to take full advantage of the archive partnership.