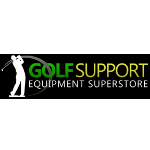 Save money whilst shopping with Golf Support cashback! Simply click get cashback, shop as normal and earn rewards in your Quidco account.

Golfsupport. is the online trading name of Golfsupport.co.uk Limited. Established over a decade ago the site was developed initially by John Lines, PGA Advanced Professional and run from Buxton and High Peak Golf Club in Derbyshire. After 2 years here the site had grown in demand and a decision was made to open a new High Street outlet in his home town of Mansfield Nottinghamshire. The new store at this time undertook all Internet responsibilities whilst John maintained his roll as Head Professional for a further 12 months.As the site developed further a decision was made to both cease as Head Professional and also separate the Internet/High street business by acquiring a new 70,000 square feet warehouse alongside the store.This is where we are at today with a Store, a warehouse and several Golf Clubs which we service for stock requirements. Our team has grown from 1 to 12 in this period with 3 further outsourced companies assisting in the ongoing developments of Golfsupport