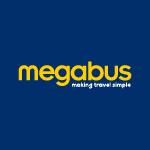 Save money whilst shopping with Megabus cashback! Simply click get cashback, shop as normal and earn rewards in your Quidco account.

Launched in the UK in 2003, megabus has since grown rapidly over the UK. The network stretches from the Highlands of Scotland to south-west England, connecting some of the UK’s most popular destinations, including London, Birmingham, Manchester, Liverpool, Leeds, Edinburgh, Glasgow and Cardiff. megabus also serves a number of airports across the country as well, including Heathrow, Gatwick, Manchester and Birmingham