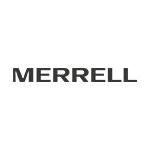 Save money whilst shopping with Merrell cashback! Simply click get cashback, shop as normal and earn rewards in your Quidco account.

Merrell exists to share the simple power of being outside with everyone. Our goal is to provide thoughtfully designed, rigorously tested products that over-deliver on performance, versatility, and durability.

Merrell was established in 1981 when two executives for the Rossignol ski company, Clark Matis and John Schweizer, decided to launch a new maker of hiking boots. The pair decided to join forces with Randal Ivan Merrell (R.I. Merrell), a maker of highly praised custom boots which retailed for $500 a pair. Matis set to work designing a more affordable high-performance boot, the Moab, which was developed in 1982. Since 1997, the company has been a wholly-owned subsidiary of shoe industry giant Wolverine World Wide.