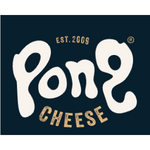 Save money whilst shopping with Pong Cheese cashback! Simply click get cashback, shop as normal and earn rewards in your Quidco account.

Pong was created to bring you some of the very best cheeses produced by the leading independent and artisan producers in the UK, complimented with some classics from Europe.

But we also feel it’s unfairly treated in the UK: it’s usually only given centre stage at the end of a dinner party when everyone’s full; in a restaurant we’re frequently forced to choose between a dessert OR cheese. Well, Pong was started to stop all this nonsense and give cheese back the attention it deserves.

In the UK, cheese is consumed by more than 98% of British households and the average person eats about 10kg per year! Sounds a lot doesn’t it, but the French, Italians, Greeks and Germans eat over twice as much cheese per day because they eat on more occasions e.g. breakfast.

Pong was created to bring you some of the very best cheeses produced by the leading independent and artisan producers in the UK, complemented with some classics from Europe. Each cheese is a little masterpiece of taste and texture and in most cases has a unique and highly skilled process behind its production. From the bizarre looking but phenomenal tasting ‘Oxford Blue’ to the now legendary ‘Stinking Bishop’, any of the cheeses available at Pong deserves centre stage.

Pong was created by two friends from Bath, the capital of the ‘Napa Valley’ of cheese: Somerset. Their passion and knowledge of cheese has led to the creation of the UK’s favourite cheese subscription programme ‘The Cheese Club’ which gives our customers hand-picked, amazing cheeses from the UK, Europe and beyond, every month…